a winter week in Spain

a bit of a last minute trip to Spain to break up the winter -- started out with two days in the Andujar area where the Iberian Lynx were not being co-operative but the habitat and birds were brilliant with displaying Spanish Imperial eagles, Vultures, flocks of up to 80 Azure-winged Magpies, Rock Sparrow, Black Wheatear, Short-toed Treecreepers, Southern Grey Shrike, Rock Buntings et al in generally sunny and warm weather though nights were cool; from there were headed south-west to Osuna where the arable fields were free of bustards and all too reminiscent of Lincolnshire but a fortuitous stop at a locked and closed reserve produced a nice flock of 40 White-headed Ducks along with Black-necked Grebes, Glossy Ibis, Greater Flamingos etc; our first Short-toed Eagle and Egyptian Vulture flow over and there were over 200 Black Kites on a roadside rubbish tip with other lfocks heading north; from here we moved on to the Tarifa / La Janda area for 3 days with the usual early migrant raptors arriving in gale force easterlies plus Spanish Imperial, Bonelli's Eagles and a Spotted Eagle, my best ever views of Black-winged Kites, the amazing spectacle of 2050 Common Cranes departing for the north-east, the Bald Ibis colony, masses of Cory's Shearwaters offshore plus my best ever views of Vagrant Emperors -- a nice week -- not always great for photography with the haze of the Saharan dust in the first days and the gale force winds making things difficult at Tarifa --
A Black-winged Kite below with a mouse taken at La Janda over 30 minutes after sunset 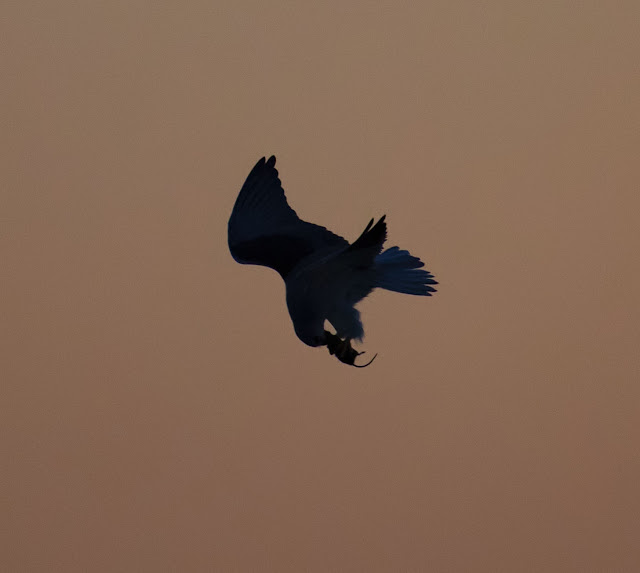